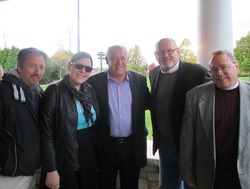 Illinois Governor Pat Quinn (center) with PVPN Executive Board Members (left to right) Art Andersen, Laura Weaver, Bob Plowman and Bob Mackert (Steve Golembiewski not pictured) as Quinn officially announced that the Westmont Park District is a recipient of the Department of Natural Resource’s PARC Grant to build a community and arts center at Ty Warner Park.
For information on the new center coming to Westmont, click here.

Information on North Side Recreation Center

The Westmont Park District will receive a grant award of $2,476,012.50, which is approximately 75% of the total project cost.  This proposed, 10,000SF building will have multiple uses, including early childhood to senior programming, cultural and performing arts programs and performances, fitness and dance classes, a banquet room for rentals and conferences and a home for our PVPN group and provide space for our SEASPAR participants.  The conceptual plans for this facility are below.  The addition of this north side center was included in the original Ty Warner Park Master Plan that was created in 1999.  It will allow the Westmont Park District the opportunity to expand our programming and services in one of the most beautiful parks in the western suburbs.

NO IMPACT ON EXISITNG TAX BASE
Powered by